A totally adorable video of two penguins looking for solace in each other under the Melbourne skyline is causing internet frenzy.. Wildlife photographer Tobias Baumgaertner witnessed this tender moment and captured the moving scene on camera. And I have to admit I haven’t seen a prettier one in a long time. As the photographer explained, a popular photo shows two penguins who have lost their partners comforting each other at the window. At the perfect time, Tobias photographed two little creatures sharing a moment of tenderness under Melbourne’s “dancing lights”. Although he captured the beautiful moment on camera almost a year ago, his photos went viral a few days ago, after a tweet. “In times like these, the lucky ones are the ones who can be with the person(s) they love the most,” the photographer wrote. “I captured this moment about a year ago. These two fairy-tale penguins perched on a rock overlooking the Melbourne skyline, standing there for hours, flipper in flipper, gazing at the twinkling lights of the horizon and ocean.

Tobias Baumgaertner, who spent several days at a penguin colony outside Melbourne’s St Kilda suburb as part of a wildlife project, said he learned about the two penguins’ history from volunteers. “A volunteer came up to me and said a white was an elderly lady who had lost her partner, and so was the young male on the left,” the photographer said. “Since then, they have met regularly to comfort each other and stand together for hours, watching the dancing lights of a nearby city. 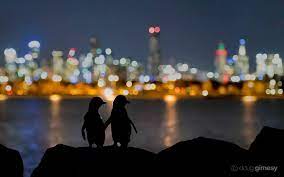 “The way these two lovebirds looked after each other was different from the rest of the colony. They seemed to just stand up, hold each other in their flippers and have a good time talking about penguin stuff while the other penguins were all sleeping or running,” Tobias wrote on Instagram.

Its allure is undeniable, but this isn’t the first time the two penguins have conquered the Internet with romance. A few years ago, a video of a pair of penguins holding flippers while walking along the beach was released and came to the spotlight. See the tender moment here: