Miracles occur in everyday life. Some lives are miraculously saved because there is virtually no chance of survival. One such story that makes us believe in miracles is the story we are going to mention here. The story is that a dog went missing off the coast of San Diego, California, two miles from San Clement Island.

A 1.5-year-old German Shepherd is believed to have fallen from a fishing boat and drowned in the Pacific Ocean. It was rather surprising that five weeks later she was found alive and in good health. The dog’s name is Luna, and she and her owner Nick Howard were on a commercial fishing boat. Luna suddenly fell into the water while they were pulling the lobster trap.

They couldn’t see her because the water was so dark and even she was dark. The owner reported the disappearance, and the dog was not found after several days of search, so it was presumed to have disappeared. 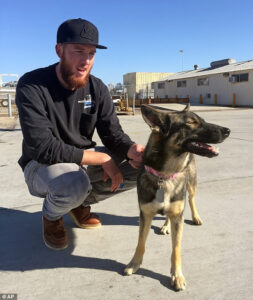 She was very good at swimming and definitely got to the shore, so her owner was convinced she was still alive. Her owner searched the waters for about two days, and even Naval Staff searched her on the island for about a week, but there was no sign of Luna.

But life is full of surprises, so about a month after she disappeared, she was spotted on San Clement Island, a Naval training base 70 miles from San Diego. 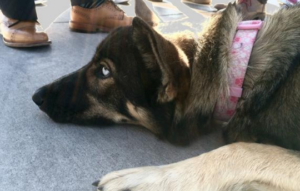 Luna was seen sitting beside the road and waving her tail, and it was a breathtaking sight as there were no domesticated animals on the island. Pets are not allowed on the island for environmental reasons. So the crew went to Luna, opened the car door, and she jumped inside.

It was believed that the dog swam ashore and ate mice on the island to survive. She has been tested by a wildlife biologist and said she is perfectly healthy. 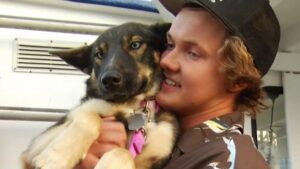 After that, her owner heard the news of her survival and was very happy and excited to learn that Luna was alive. The good news is that the dog’s life has been saved.