A good man decided to intervene in nature to assist a poor swan in becoming a mother. After witnessing the swan’s nest being destroyed by floods or predators for more than a decade, he decided to help her out.

For the past ten years, “the unlucky” swan has been laying her eggs at the Jones Boatyard in St Ives, England, only to have them vanish each time. But, thanks to the efforts of a Good Samaritan, her luck changed this year, and she became a mother. 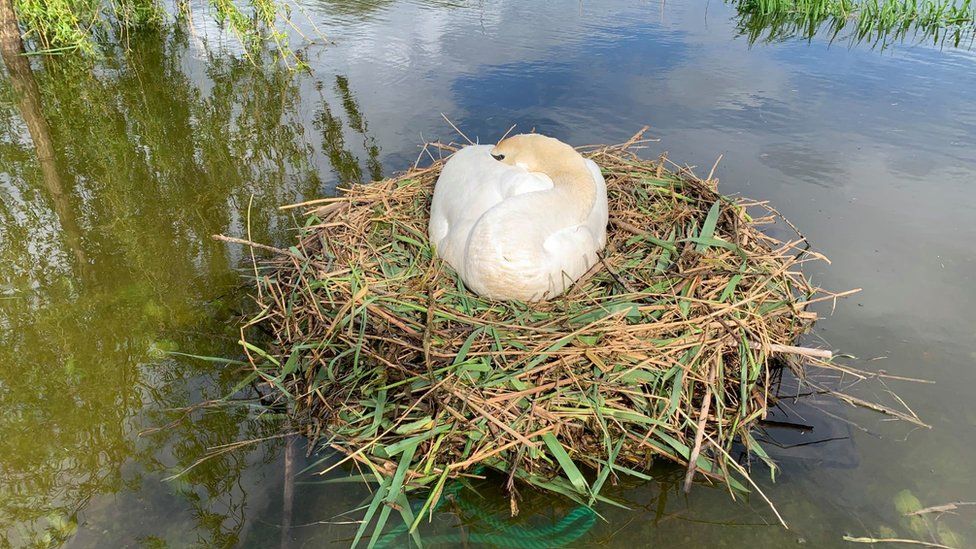 Rob Adamson, who lives on a narrowboat, had seen the swan’s fate over the years and decided that enough was enough. Adamson, who adores swans and once rescued and raised a cygnet, first built a fence to keep predators – mostly foxes – at bay. But then he noticed that the water level was rising, putting the swan’s nest in jeopardy once more. But the tenacious man also saved the day! “She’s the unluckiest swan,” the man told the BBC. “I needed to make sure they survived. You’re not supposed to get involved, but they were all going to die. As a result, I couldn’t sleep knowing that. I knew I’d be sorry if I didn’t intervene to save them.” Said and done, as Adamson constructed a raft on which the swan family could safely build their nest. Predators and natural phenomena have been kept at bay in this manner. Finally, the man’s efforts were rewarded. After all of the swan’s eggs have hatched and eight perfect cygnets have seen the light of day, it’s been a few weeks. Both their parents, as well as our hero, could not have been more pleased with such a sight. “For the last week, I’ve been pacing around the marina like an expectant father,” Adamson revealed. “I was overjoyed when I saw them begin to hatch, it was like winning the lottery.”

In the video below, you can learn more about this sweet story!