Interspecies relationships are not just a struggle for survival. Sometimes animals form the most unusual bonds, proving that love and friendship have no boundaries. But when it comes to improbable relationships, the animal kingdom is amazing. Speaking of which, Herman and Lundy are definitely a very unique yet very charming duo!

Herman, the flightless rescue pigeon, and the 10-week-old Chihuahua, Lundy, who can’t walk, captured everyone’s hearts with their special relationship. The two adorable animals met at The Mia Foundation, a nonprofit organization based in Rochester, New York dedicated to the rehabilitation of animals with birth defects. Herman has been in the rescue center for over a year. Then the baby was found in the parking lot, unable to fly and move. At the time, wildlife rescuers said he had a chance of surviving, but Sue Rogers, founder of The Mia Foundation, knew Herman would beat the odds. Unfortunately, he will no longer be able to fly, but that doesn’t stop the little creature from becoming such a lovable creature and a center for him to become a permanent resident.

Lundy, on the other hand, was only 4 weeks old when a South Carolina zookeeper decided he was useless due to special needs, so the poor baby ended up in shelter. Luckily, he arrived at the Sue’s foundation , where he found the love and comfort he needed. And above all, he found a special friend. It was love at first sight when they first met and Sue knew they would be best friends. “I took Herman from the playpen to give him some time out and put him on the dog bed ,” Sue told WHEC TV. “Then I had to take care of Lundy, so I put him on the bed of the dog next to him.” 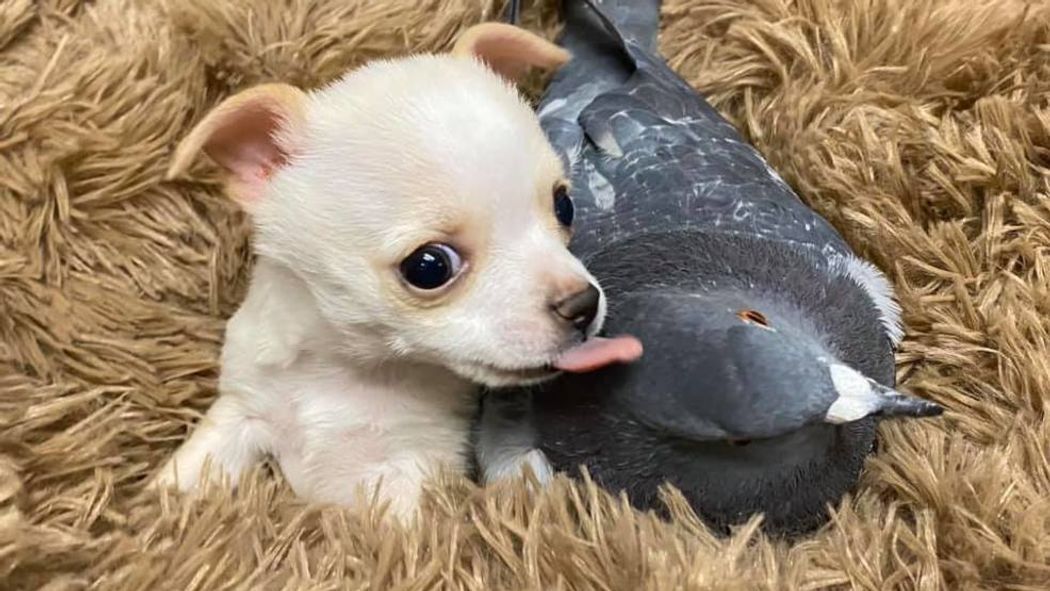 From that moment on, Herman and Lundy were inseparable, and after Sue took several pictures together, the special bond they shared went viral on the internet. “They were so cute, so I took them a picture,” she said. “I posted them on Facebook and the next morning it was crazy.”

Sue’s post went viral and millions of people were consumed by this adorable duo. Moreover, thanks to the popularity of Herman and Lundy, many people have donated for rescue center. “From a simple photo of a pigeon and a puppy, we have already received over $6,000 in donations,” said Sue. “I think the world needs a good story and it can touch your heart when you have two races that basically fall in love with each other.”