Our descendants always leave us speechless, but just imagine your 4-year-old son returning home with little deer as a friend. What is this in a fairy tale? Well, that was exactly what Stephanie Brown saw while vacationing at the Massanutten Resort in Virginia. Stephanie couldn’t believe her eyes as she opened the door and saw her four-year-old son Dominic by the little deer on the porch. She was, of course, stunned by the Disney sights, but she managed to snap a few photos of the delightful moments. Needless to say, the beautiful photo went viral soon after Stephanie shared it on her Facebook. After all, you don’t see your 4-year-old baby and wild deer roaming around every day.

Mother explained that they were leaving the resort, and Dominic was playing near the hut while she packed up. However, it is unknown how the two came to be together. Whether the little deer was attracted to Dominic’s pajamas, or whether he offered her something to eat, one thing is for sure, they immediately became friends. Dominic, wanting to introduce his new friend to his mother, they both showed up at the door to the surprise of the boy’s mom. 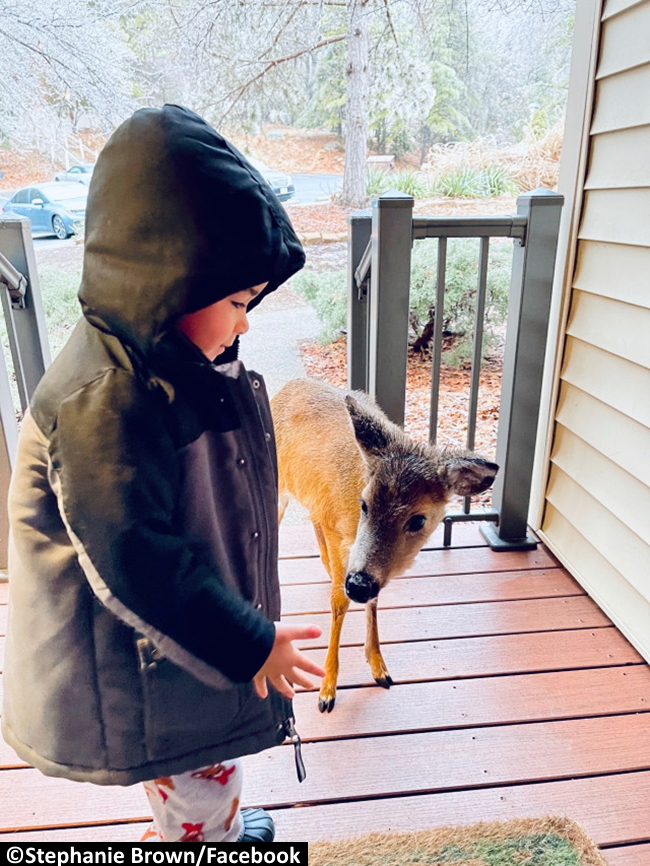 “I was shocked. I said, ‘No. My mind is playing a game with me’,” Stephanie told ABC. “It wasn’t like anything strange for him, it was so weird. They were just in sync.”

It’s amazing how the deer behaved. She didn’t look scared or uncomfortable for even a second in front of people or cameras. The way she posed for the camera gave the impression that she’s really acting. Dominic even gave his new friend a name. He named the little deer Flash after a DC Comics superhero.

Once Stephanie shared the lovely snap on Facebook, thousands of reactions and comments started to shower. “They both look like this is an everyday occurrence for them. So precious, both of them,” one person wrote. “Your son and his friend are super cute. Great pic,” another one added. “They look like buddies,” wrote another one.